Traditionally, the beginning of the New Year (according to the secular calendar) is used by the United States and other “players” to launch military operations in the Middle East.

On the night between January 2nd and 3rd, the Americans carried out the airstrike on the Baghdad international airport (Iraq), where there was a meeting between the Iranian Major General Qassem Suleimani and the Iraqi field commander Abu Mahdi al-Muhandis. Both were killed during the attack taken by the precision missiles. The dead Major General Suleimani is a national hero in the Islamic Republic. He led the Al-Quds brigade that is a military unit of the guards of the Islamic revolution, that have conducted the secret operations abroad since 1998. In many ways, Iran managed through his efforts to gain a foothold in Syria and Iraq, which became a serious irritating factor for the US and Israel.

It is important to understand that America’s elite is trying to involve worlds’ countries into a large conflict to solve its internal problems. There is a confrontation, practically a civil war between different clans. Unfortunately, this war is similar to the war between the New Aristocracy (financial capitalism) and the industrial-oriented Bourgeoisie (industrial-financial capital). Slavery and colonial policy are acceptable to both of the sides. America’s debt is growing; the economy is on the verge of collapse. They see only the one way out that is to start a big war. Therefore, all sorts of the provocations are arranged in different regions of the world. Iran was appointed to be the main enemy in the Middle East. The traditional approach “divide and conquer” is used, when the countries of the Persian Gulf and the Maghreb are split into the two camps which are based on the religious signs (Shiites and Sunnis). It obviously creates a tension in the region and is used as a tool of the intervention of various kinds.

According to the Israeli newspaper, Sheikh Hassan Nasrallah, the Secretary General of the Lebanese political and paramilitary party Hezbollah, directly stated that the Zionists of Israel were behind this murder: “The Israelis had failed to carry out the secret elimination of Major General Qasem Soleimani and asked the Americans for help. And Americans fulfilled the order of the “Zionist enemy”. Let’s explain that there has been even a more severe crisis in Israel than in the United States over the past year, the country’s leadership was re-elected three times. The representatives of the Zionist Likud, which are leading by Netanyahu, failed to make up a coalition in the Knesset. Israel’s economy got worse after Germany had finished paying reparations to it. Thus, the Israeli leadership is ready for the most incredible scenarios in order to improve its political and economic situation. At the same time, Israel pursues a policy in the region with the help of America, to which a number of Arab countries is loyal. Saudi Arabia, being Tehran’s strongest opponent in the Middle East, is one of such countries. Saudi Arabia’s Deputy Defense Minister Prince Khalid bin Salman met with Donald Trump in Washington on Monday, January, 6. Trump said that they had discussed stability in the Middle East as well as oil prices. It may be recalled that the global commodity market immediately responded to the killing of Iran’s top military by increasing oil price indexes. The Prince also met with US Secretary of State Mike Pompeo in Washington. Pompeo, in turn, welcomed the visit of the Prince, emphasizing the importance of relations between the two countries to counter Iran’s destabilizing behavior. So, there are the US military bases in Jordan, Iraq, Kuwait, Qatar, the United Arab Emirates, Oman, Saudi Arabia and Afghanistan. 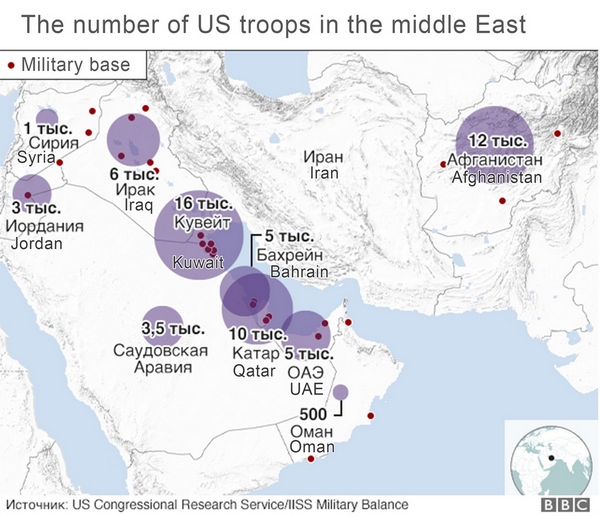 However, if the United States and Israel use such a provocation to conduct their election campaigns and to justify an increase in the military and special departments’ budgets, then this is an absolute craziness. Such a provocation can lead to a full-scale war and there will be no winners.

Let us explain that from the perspective of Iran’s internal architecture, the IRGC is a leading religious-military-political organization formed to protect the political system of the Islamic Republic of Iran in 1979. The organization integrates army units, the air force, the navy, the people’s army, special operations forces, and structures associated with the country’s nuclear and missile programs. The corps is formed on a voluntary basis and is directly subordinate to the Supreme Leader of Iran, the head of Shiite Muslims, Ayatollah Ali Khomeini. For the soldiers of the IRGC and the inhabitants of Iran, the military commander Soleimani is the personification of honor, pride and their ideals. Ayatollah Ali Khamenei once called Suleimani “a living martyr of the revolution”. Therefore, in Iran, the news about the death of Qassem Suleimani was received with anger and the demand for revenge. Tens of thousands of people across the country protest against US actions. 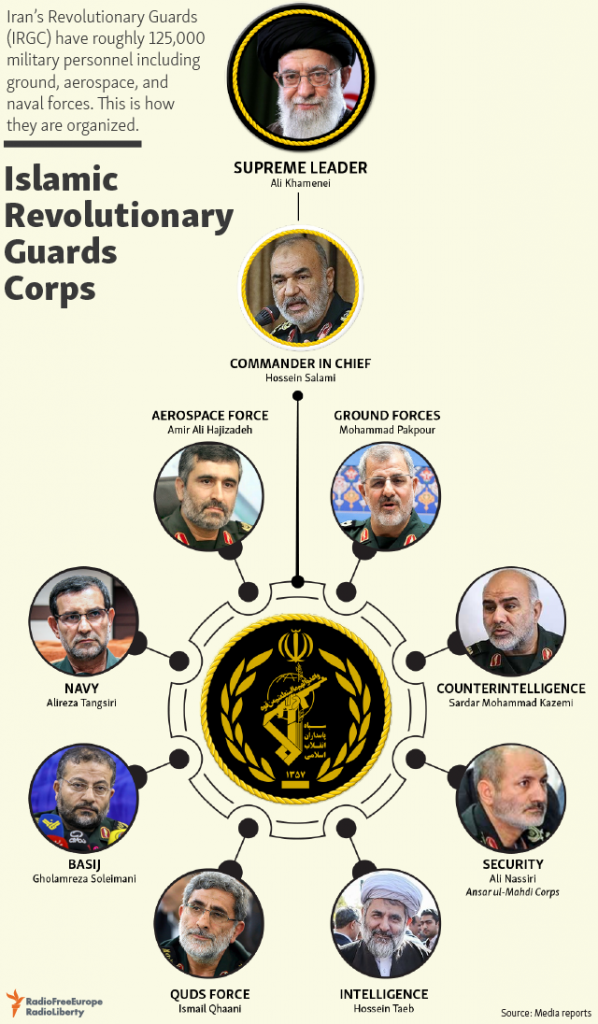 We are confident that the Iranian authorities understand that this is a crazy provocation and they want to drag them into a foreign war, the war of all against all. But every sane leading expert and analyst understand that the Iranian leadership was faced with a very difficult choice, firstly, because of the internal architecture of Iran and the Suleimanis’ role, and, secondly, because of the mass requirements for the vengeance among the military and the IRGC volunteers. The lack of the response would mean a completely discrediting, losing the power as a sacred function of managing the society. The leadership of Iran faced the threat of becoming a spiritless entity in the eyes of the Iranian people who would not understand and would not accept it.

Therefore, despite all the fear and understanding of a possible escalation and deployment of a full-scale conflict in the Middle East, as well as the threat of direct military attack against Iran, the Iranian leadership was forced to look for the options of the retaliatory military action. The way it was conducted and its goals are incommensurable with the emotional pain experienced by the Iranians after the death of Suleimani.

On the night of January, the 8th, the ballistic missiles were fired at US military bases in Iraq from the territory of Iran as the part of the operation “the Martyr Suleimani”. It was not aimed at high-ranking military personnel. It was rather a propaganda campaign, showing that everyone, who would host Americans, would be targeted. The Iranian leadership acted like this to minimize a possible escalation of tension. Iranian Minister of Foreign Affairs Javad Zarif declared that: “Iran took & concluded proportionate measures in self-defense under Article 51 of UN Charter targeting base from which cowardly armed attack against our citizens & senior officials were launched. We do not seek escalation or war, but will defend ourselves against any aggression”.

Trump announced new economic sanctions on Iran. At the end of his brief speech, Trump appealed to the leaders and the people of Iran and expressed his readiness for a peaceful resolution of the conflict, noting that the US and Iran have already shown that they have contact points when they fought against ISIS. Perhaps, it indicates that the assassination of the Iranian General by the American military was not approved by the President. Iran’s attack on the military infrastructure in Iraq did not lead to any victims among the US senior officials or any American personnel, or to any victims among the military of NATO countries.

On the eve of the retaliatory strike, Germany and other NATO countries withdrew “part of their troops from Iraq”. We have the impression that the Iranian side tried to avoid losses among the NATO troops by all means without a military escalation.

The trouble is that the world community did not formulate a demand for America after the assassination of General Suleimani and did not propose any solution to Tehran.

None of the world leaders, except Malaysia and China, condemned the actions of the United States openly and unequivocally. It seems that the leadership of Europe and Russia is gently trying to avoid involving into the confrontation, chooses a radically wrong way sitting tight and waiting.

It is convenient for America to start a war far way at a distance territory. The war will affect, first of all, the Middle East region, Russia and Europe. Let us recall that Russia has a population of 25 million Muslims. War will be formally declared by America. But the Holy war with the “infidels” will be waged by the soldiers of Islam wherever they can reach. And the Russian population will also fall into the category of the infidels, because, firstly, it has not formally condemned the aggression, and, secondly, the war on the basis of religious radicalism (the principle of separation into “your own and others” on the basis of the religious criteria) is not a high-precision weapon, but tends to turn in the direction of “who is not with us, is against us”. The fuse, set on the fire of the religious radicalism and fanaticism ground, will be very difficult to extinguish.

The position of the European Union is especially strange, as if it was blind-deaf-dumb. Having such a huge number of the «not quite peacefully integrated Islamic population», it is actually sitting on a powder keg, under which America ignites the fuse. It is not by chance that Merkel will arrive on January the 11th for the negotiations with Putin about the Middle East. Let us recall that there are about 4, 5 million adherents of Islam of different kinds in Germany at the moment. Turkey mainly trains the imams who lead the flock in Germany. The world information network is full of the examples explaining that the Turkish policy of Islamization and training adherents of Islam is not always peaceful. Sometimes it openly threatens the peace in the territory where these imams are going to work in the future. 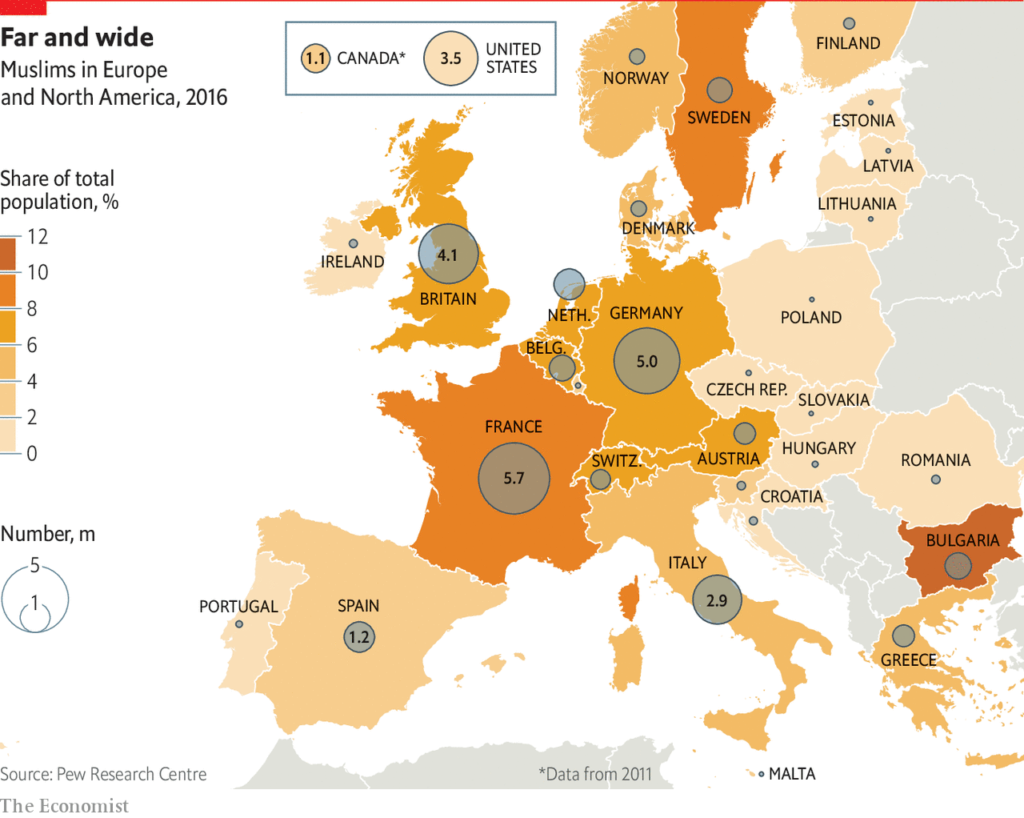 Even if the conflict is settled, the threat of the war between Iran and the United States still remains. In the long term, the region will continue to sink into the abyss of the war if the countries of the world do not show their political will and courage to call a spade a spade and offer solutions. Of course, the issue is connected with the conflict between elites inside the United States, and, in this sense, the voice of its nation is very important. Iran has made an appeal to the people of America, but a big question is whether the American population is able to deal with the internal contradictions and make a request to the authorities. Islamic countries should conduct an awareness-raising work with the population of the aggressive countries in order to avoid this aggression.

We must call a spade a spade, openly force aggressors and provocateurs among both the leadership and the world population to peace. We understand that many issues are in the blind spot for both of them. At present, ignorance and misunderstanding is the most terrible enemy. It is necessary to understand, to explain and to formulate a position in the cyberspace and in the real life. Competitions and adventures should be left aside as far as this is a question of a duty to the future.

Thanks to the publications who have already published materials on this region, and whose materials seemed interesting to us: